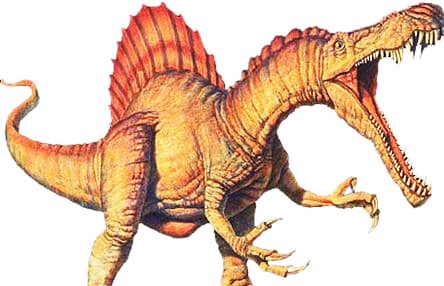 Home News The spinosaurus, a dinosaur like no other …
NewsSciences

by Pierre-Alain Lévy 25 May 2020
FacebookTwitterPinterestLinkedinEmail

Have you seen this charming beast, the spinosaurus, which illustrates this article? Don’t think this is a pencil sketch from a comic book illustrator in search of fantastic inspiration, or the alcoholic delusions of a screenwriter tempted by the Hollywood studios! No, this animal exists, or more exactly did indeed exist on earth but millions of years ago, at the good time of the Jurassic, from 200 to 145 million years approximately, it is a spinosaurus. Enough to put all our little anxieties out of our reptilian brain into perspective on the frightening discovery of this now dear COVID 19!

Said like that, and for the man-in-the-street, it would be cold in the back all the more when we know the dimensions that such a creature could reach and attested by the skeletons and fossils that we have discovered.

Imagine it, 6m40 high, 15m long, and weighing 15 tons for the older ones, a crest on the back a bit like a lionfish and a crocodile mouth, just that!

What exactly do we know about the spinosaurus!

Much, precisely and more and more and more, this in an entropic way of our contemporary knowledge connecting at the same time the infinitely small, the infra-microscopic, and the spectacular rise in time of which paleontology is a perfect example, very object of this article. All this of course, as a rigorous counterpart of astrophysics or genetics whose researchers every day help to better explore what if not other more substantial words, we would be tempted to call « the search for life » .

The discovery of fossils of this dinosaur is thus confirmed on the whole planet earth, America, Europe, Asia (China) Africa (Egypt, Morocco). These current geographical names used for semantic convenience being, it should obviously be emphasized, in themselves erroneous for telluric reasons of formation of the continents. Remember the Jurassic!

So this spinosaurus is in the news! Rest assured, no news from Siberia of a permafrost in the process of thawing and revealing on the surface of frozen carcasses of these paleontological times, IT WOULD BE PURE FICTION …!

In a study published in Nature, we discover that this spinosaur which we believed to be essentially terrestrial could also have an aquatic life, move and live under water and feed in this way. This is a study of the Spinosaurus aegyptiacus, a fossil discovered at the site of Kem Kem, a rocky plateau in south-eastern Morocco.

Researchers using a computerized flattening infographic system were thus able to analyze the wave force of the caudal axis, i.e. the tail. To this end, they even built in plastics a model of this caudal axis of the spinosaurus (remember that the spinosaurus is a variety of dinosaurs identifiable by the crest on the top of the back). Thus the tail of the spinosaurus is more mobile, equipped with greater lateral throwing force in the water and capable of speed a little like crocodiles. Eight times more powerful than the tail of other theropod dinosaurs. These observations were also able to be compared with the previous documented and conducted discoveries on the ichthyophagous food (based on fish) of this Jurassic lizard.

These studies are similarly based on anatomical and comparative observations of the skeletons. Thus the Spinosaurus aegyptiacus specifically has more reduced hind limbs, broad legs with flat claws, long bones with a very small medullary cavity. It is also defined by a series of cranial characteristics, namely: retracted nostrils, an interlocking of conical teeth, a « rostro-mandibular integumentary sensory system » in other words a system of sensors at the jaw level.

These observations on this Spinosaurus aegyptiacus found in Morocco were combined with taphonomic findings (studies relating to the formation of fossils), mechanical modeling and it goes without saying, anatomical.

Note that this is a multicenter study conducted by research centers in the Usa, Italy, UK, Germany and Morocco.

The bizarre world of quantum interpretations

The mysteries of finance … or Deng Xiao Ping are you there?