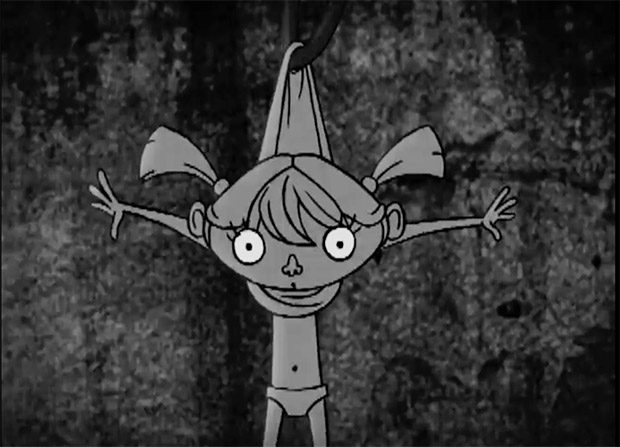 In the field of animated film, there are countless student films, there are all kinds. Many of them have real qualities, making their authors stand out to the wider world of film studio professionals.

This is how David Ochs made himself known by directing in 2009 Who’s hungry?

Black and white, you say, again, yes! And this choice does not proceed from aesthetic desires of seduction, but from a deeper psychic orientation. Don’t get me wrong, in other words, it’s not about making things beautiful, building a dream world. In fact, the parsimony of the means used and image renderings, makes it possible to be efficient and demonstrative to convey a message (an expression which has become somewhat obsolete today), an atmosphere, indicate a direction, weigh more heavily in the eyes. of the spectator. So this is the choice of David Ochs in this film.

In this regard, I asked myself the question when I saw, when it was released a long time ago now in 1988, “The Grave of the fireflies火垂るの墓, Hotaru no haka” by Isao Takahata, absolute masterpiece with a dramatic and overwhelming subject.

What would this same story have given if it had been interpreted by actors in real settings and under harsh lights. The emotional charge would have been different, the realization in the form of animated film, authorized the director to produce this same type of emotions so little externalized in the Japanese mentality what a “classic” film would not have allowed.

The choice of black and white proceeds from the same reason and does not interfere with an aesthetic subjectivity.

Comparison is not right it is well known and what precedes is only a temptation to define cinematographic achievement using the most appropriate, most appropriate palette.

What is this piece of film about? A connection with the German tale Hansel and Gretel is perfectly assumed by the director. However, it would be fairer to relate the content of this film to the catharsic function of the fairy tale as defined by the psychoanalyst Bruno Bettelheim.

A little boy and a little girl kidnapped by an ice-cream seller, a kind of ogre, devouring childish flesh, the rest is narrative dress.

But in fact, what does an ogre represent? What does the wolf say to Little Red Riding Hood?

This film, even if it is in many ways nightmarish and frightening (but we know that children, if they hide their eyes, it is for better seeing!) is a warning about what to call by name, sexual predators. The warning is subliminal.

The bad guy is punished (not to say castrated). So everything ends very well and the two children are safe, recover their freedom. It’s what matters most, right?