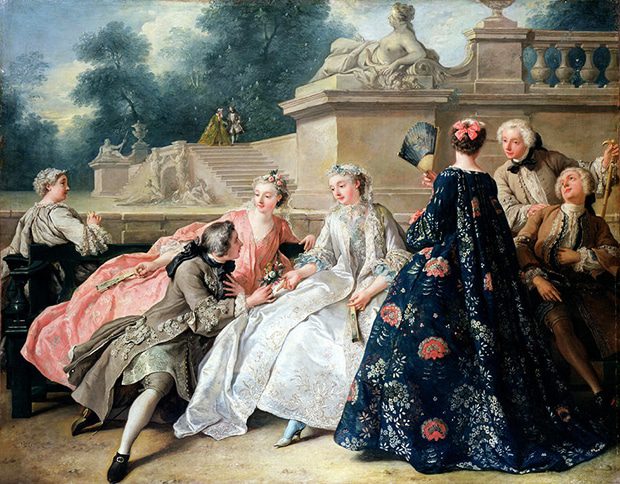 There is not a study on the Regency or the Regent that does not refer in the biography to the Memoirs of Madame de Staal-Delaunay that the Le temps retrouvé collection of the Mercure de France editions has just republished. Memoirs incomplete, by the will of her author, since she does not write about the last years of her life.

The least we can say is that Rose de Launay, born Marguerite Cordier (de Launay then Delaunay, her mother’s last name) wife of Staal, is a complete stranger. Only a few old wretched historians know that this is not a fictional character, but one of our ancestors who, in their place, took part, in the shadows, in the history of France. It was her privileged position as companion to Anne-Louise, Duchess of Maine, that enabled her to emerge from the most complete anonymity.

Rose was born in Paris in 1683 to obscure parents. She did not know her father, a French painter living in England, who died when she was very young, however she had a pampered childhood.

Her mother, to be able to survive resides in a convent where the little girl became the center of interest of the whole community dominated by the ladies of Grieux who took charge of her education, an education marked by pious readings, but which did not stop not just that. With her friend, Mademoiselle de Silly, they discuss the work of Descartes. We are very far from the image of the education of the submissive woman, educated to serve her future husband, her lord and master, only knowing how to sew and manage the smooth running of the house. As a teenager, she knows the first emotions of love with her friend’s brother.

After many disappointments when she realizes that she is not the center of the world, she ends up entering as a chambermaid in the house of the Duchess of Maine, the wife of the legitimized son of Louis XIV and of Madame by Montespan. Her culture, her writing skills, her gift for organizing parties (the famous nights of the Sceaux)( a castle and estate nearby Paris), make her progress in the hierarchy of the ducal house. She is the one who reads to the Duchess, who writes many of her letters.

When Louis XIV dies, the Regent immediately breaks the will of the monarch, and gradually withdraws many privileges from legitimized children. The Duchess is much more vindictive and fierce than her husband in defending his rights. And it is the so-called Cellamare conspiracy against the Regent, a plot that could be qualified as an “operetta” as the secrecy was known to the whole Court and the course followed daily by Father Dubois, which is worth the arrest. of all the protagonists and the confinement in the Bastille prison, including the young lady Delaunay.

She said she knew nothing about it. What is certain is that she displayed complete loyalty to her mistress, which made her one of the last freed conspirators. In prison, she falls in love with another inmate, but soon realizes that behind the enchanting words, feelings were nonexistent.

When she was released from prison, she returned to the Duchess of Maine and resumed her work with her. She falls in love again, is courted by more than one man, experiences a few moments of depression and ends up marrying Monsieur de Staal, to have a “stable situation”. His memoir ends with a eulogy to the Duke of Maine upon his death in 1736.

More than a third of her Memoirs recounts her captivity in the Bastille, the intrigues that take place there, the daily life of a prisoner who, even if she is not part of the people, does not have all the advantages of the elites of the time. .Those who criticize the VIP cells in our current prisons would do well to read Madame de Staal-Delaunay, only to find that they are really very harsh.

Especially Madame de Staal-Delaunay, while showing unfailing loyalty to the Duchess of Maine, sketches a portrait of her that is not very flattering in our eyes: selfish, certain of her superiority by virtue of her rank, jealous, not listening to others , wanting to control everything, especially her reader to whom she denies any idea of ​​freedom, while she aspires only to that.

These Memoirs recreate the atmosphere that reigned at Sceaux at the time of the Regency, the intrigues, but also the joys, the sorrows, the questions of Madame de Staal-Delaunay which resemble very little to our joys, our sorrows, to our questions, which makes her very close to us.

Radioscopy of the empire (6) Rome’s legacy