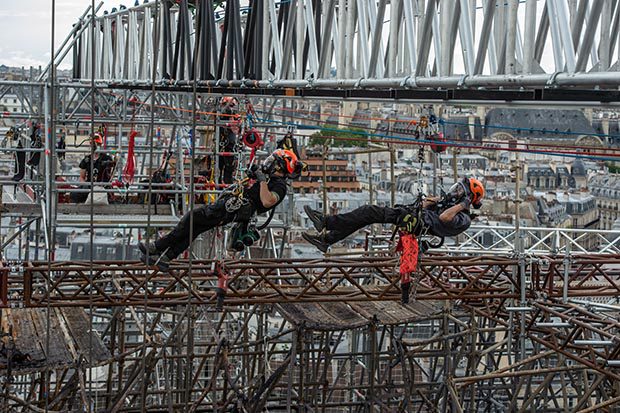 Essential operation of the site of the Notre-Dame de Paris cathedral, the removal of the damaged scaffolding is now complete

Perched above the rooftops of Paris which they dominate, a flock of acrobatic carpenters have been busying themselves for several months discreetly overlooking the nave of Notre-Dame. She must be rid of her scaffolding of molten metal which threatens her. Meticulous and unique work. They had to work, invent, experiment with new techniques, a whole lot of engineering, to achieve such a feat. Beyond the deconstruction-construction site, the initial constraints of lead, the Covid or the weather, it is also a human feat, made up of courage, will, physical strength and transcendence. A surpassing of oneself to get in tune, to the drone we could say, of this Beauty of stone, light and memory.

During the fire of April 15, 2019, the spire of Notre-Dame de Paris cathedral was under restoration. The purpose-built scaffolding resisted the collapse of the spire but was warped by the heat of the fire. Made up of a tangle of 40,000 pieces weighing 200 tons, half of which were over 40 meters high, it posed a serious threat to the cathedral.

This unprecedented and particularly complex operation was carefully prepared.

Under the wings of the angels of the frames

Before the removal which began on June 8, 2020, the scaffolding was first instrumented so that the work could proceed in complete safety, then surrounded by metal beams on three levels to stabilize it and prevent any risk of collapse. The structure was then framed on both sides by a second scaffolding to install metal beams, to allow rope access workers to descend into the heart of the burnt out scaffolding.

The protocol foresees that the scaffolders dismantle the accessible parts using a basket, while the rope access technicians descend as close as possible to the charred parts to cut, using saber saws, the molten metal tubes on each other. the others, evacuated thanks to the large tower crane of 80 meters (equivalent 262ft 5).

In mid-August, the rope access mission ended and the scaffolders were able to take over to complete the operation.

As no nacelle can be lifted in a wind blowing above 36 km / h (equivalent 26 miles/h), a 2 × 8 operation has been set up for the last operations carried out in the fall, in order to make the most of the favorable weather conditions, when they are combined.

At the end of October, the scaffolding was separated into four stable and independent sets, making it possible to release, using the tower crane, a large wooden beam suspended above the crossing of the transept, which threatened to fall.

The dismantling was completed today, in the presence of Madame Roselyne Bachelot, Minister of Culture, Army General Jean-Louis Georgelin, President of the Public establishment responsible for the conservation and restoration of Notre-Dame Cathedral in Paris, of Mr. Marc Guillaume, prefect of the Ile de France Region and of Monsignor Chauvet, rector of the cathedral.

«  I would like to thank all the scaffolders, rope access technicians, aerial work platforms and crane operators who worked tirelessly to carry out this operation. The threat that this scaffolding represented for the cathedral has now been lifted. We will be able to get down to the last stages of securing», said Army General Jean-Louis Georgelin.

Completing the dismantling of the damaged scaffolding allows for equally novel and complex work to be undertaken. They will begin with the installation of a temporary umbrella to keep the transept crossing out of water and will continue with the securing of the births of the crossing vault. Finally, the rope access technicians will carry out the evacuation of the remains, the cleaning and the suction of the four vaults adjacent to the crossing of the transept. This last operation will allow the chief architects of historic monuments to refine their diagnosis, prior to restoration work.

A series of 15 articles to come in WUKALI: The XXth century, a century of iron and blood.