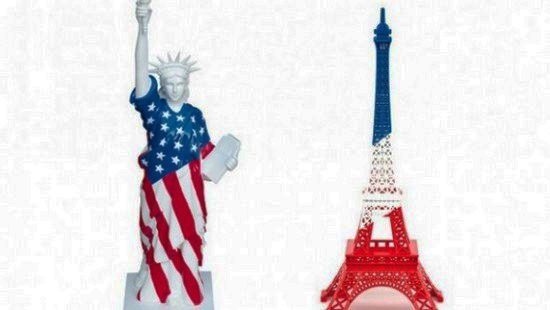 The twentieth century was an illustration of this. Massacres, wars, violence in general are often underpinned by ideological conflicts; it would seem a priori that the 21st century is not lacking either! We will give an example, a little baroque certainly, but nevertheless very real.

A book by François Cusset, (Normalien Ecole Normale Supérieure, historian, former head of the French Book Office in New York), “The French Theory” (*), has the merit of clearing an often unrecognized track, which highlights a conflict that, certainly, with repercussions even in our daily lives, but of which one often ignores the existence and, even more, the genesis.

François Cusset does not fail, in this book, to clearly indicate in which camp he finds himself, when for example, mentioning the book by Alain Finkelkraut, “The defeat of thought“, he describes it as “an apocalyptic portrait of an American university in the hands of barbarians, and where we only read black lesbians and the biographies of rock stars ”. Cusset is clearly not in Finkelkraut’s camp. But François Cusset’s value judgments are not our subject; because in his excellent book, published in 2003, he describes and explains phenomena which are now at the heart of our lives.

His description of life on American campuses, as well as the history of American universities, are instructive.

There are nearly 4,000 institutions of higher education in the United States, the “standard, in this area, being rather the campus on the edge of this forest, in accordance with the agrarian mythology of the American nineteenth century in which a bucolic setting .. . will guarantee probity, strength of character and academic excellence ”.

François Cusset adds that “the American social fabric owes a lot to the formidable spatial-cultural isolation of student life … between the whimsical expense of childhood and the work ethic that will follow, the” colleges years “constitute a respite… everything contributes to making this transitional space a veritable moratorium between the recklessness of the “teenager” and the struggle of the “grown-up” for survival … the separatism of the American university institution operates at all levels : geographically by the isolation of campuses, demographically by subtracting 80% of a generation from social structures, … intellectually by assigning only the academic field the task of animating the debate of ideas ”.

Suddenly, the American university becomes a national issue and the sounding board for the “hottest issues in American society”.

This is the question Cusset is asking himself. American University, what is it and what is it for?

“A historical ambiguity is lodged at the heart of the American university system: the hesitation that has characterized it, from its origins, between a universalist approach and a professionalist, generalist and technical approach … humanist and vocationalist”. In other words, between those who think that the university should train an “honest man”, and those who think that the university should prepare for integration into the labor market. The American university system has repeatedly hesitated between the one and the other approach, but will lean more and more, over the years, towards a utilitarian philosophy.

The first American universities were created in the 17th and 18th centuries: Harvard was founded in 1636, Dartmouth in 1769, Columbia in 1779, etc … In 1868, the “Yale Report” recalls that “our object is not ‘to teach what is unique to each profession, but to expose the foundations which are common to them all ”.

However, in the middle of the XIXth century, the scales started to tip in the other direction, and as the philosopher Charles Sanders Pierce noted in 1891, “the university has nothing to do with education“, but must dispense “relevant” knowledge, or, as Andrew Carnegie puts it, the university must “train future captains of industry”. “The control of the large trusts, notes Cusset, will not be relaxed any longer, responsible for the budgetary values ​​made to certain disciplines at the expense of others deemed less useful … the new entrepreneurial ideology will permeate the university, dictating its utilitarian morality and its principles. specialization objectives ”.

Nevertheless, the debate continued in the years 1961-1963. Daniel Bell, in his manifesto “The reforming of General Education” indicates that he wants to strengthen “general knowledge”, while the Kennedy administration, on the contrary, seeks to train experts in order to win the race for the conquest of space against Russians.

A compromise had certainly been found at the beginning of the 20th century, by creating “majors” subjects, common to all students, and “minor” subjects, more specialized. But in the end no one was satisfied with this compromise, and “scholarship and know-how” will increasingly come face to face, irreconcilable.

In the 1970s, the “learn to earn” philosophy took hold, with culture replaced by the pursuit of excellence and performance benchmarks.

At the same time, universities are in fierce competition with each other, seeking to develop the best-selling products in order to attract as many students as possible. For example, “feminist studies” seeks to attract female students, while research on ethnic or sexual minorities seeks to attract new segments of the population. Cusset quotes Hannah Arendt who, observing the American university, notes that “pedagogy has become a science of teaching in general, to the point of breaking away from the subject to be taught“.

Consequence of this utilitarian philosophy to the detriment of general culture: in the 1970s, registrations in “Liberal Arts” continued to decline in favor of more technical departments. Yet, however, the story will not end there; the literature departments were going to take their revenge, and what revenge, we will see later …

The fierce competition between universities is not confined to attracting the maximum number of quality students; well-known teachers, like soccer players these days, are also the subject of the most diligent attention.

It is in this hot pot of competition that American college professors must manage their careers; because between an obscure professor of a small provincial university and a star of an Ivy League or the equivalent, the gap is immense. “Many Americans will have heard of the vintage cars of Stanley Fish (professor of literature and former dean of the College of Liberal Arts at the University of Illinois), of Cornell West‘s emoluments (African American, professor at Harvard and Princeton), the friendly network of Stephen Greenblatt (professor at Berkeley, and Harvard, literary critic and Pulitzer Prize for the essay), sartorial provocations of techno-feminist Donna Haraway (professor of literature at the University of California and at Johns-Hopkins), or the late Buddhist turn of queer theorist Eve Sedgwick (professor at Berkeley, Boston University, Amherst College, and Duke University) ”. These Happy Few become real rock stars!

The career of a university professor is therefore fraught with pitfalls. He must first be tenured (get “tenure“), an obstacle course. We must also publish excessively (“publish or perish“), then strive, once rock-star status is obtained, to remain the most expensive product on the market. To stay the course, we must constantly innovate, show originality, transgress the status quo, make obsolete the work of a known colleague, rule out colleagues in this “rat race“, and become, as Bourdieu said “a consecrated heretic ”. It is then, when a few controversial works have been published, that one can claim the status of a university “diva”. Of course, we will not have access to the columns of major newspapers or to television sets (as in France), but we will become a star that we will talk about in the magazine supplement of the New York Times, and the little tics of the new star will become known to the general public.

Such is the cruel picture painted by Cusset.

When things get worst before they get better

It was in this American context so aptly described by Cusset, namely, the spatial-cultural isolation of students, excessive specialization, and the star system of university professors, that the Athenians came to grips with; and, let us be reassured, that our beautiful country, France, will play a decisive role there.

But before moving on to this new theory in the making, let’s describe a final picture in order to perfect the scenery of what is going to be played out.

This extraordinary phenomenon prepares for what will happen some thirty years later as European and American intellectual currents mix. As Cusset notes, “this is the impact of German Expressionism, and of novelists converted into screenwriters to make ends meet, on the Hollywood production of the 1940s. And this is of course denied by both. parties, the influence of surrealism in exile on the young American artistic guard ”.

Everything is therefore in place for French philosophers to become, in the 1970s, and almost despite themselves, rock stars in the United States, unwittingly creating an ideological movement that will escape them.
To be continued…
Calendar of next publications below


At the dawn of the XXIst century ( original title in French : À  l’aube du XXIème siècle)
By Jacques Trauman