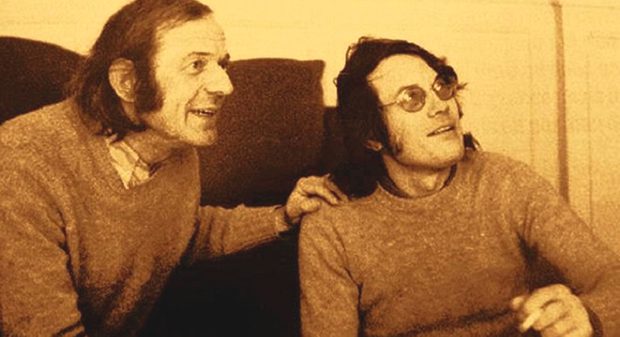 It was at the beginning of the 1970s that, in confidential para-university journals, simple mimeographed pages, certain French philosophers made themselves known on American campuses; the magazines are stapled, badly typed, badly translated, they are passed, in class, from hand to hand. Then, it is more established journals, but still confidential, like Glyph, Diaspora, Semiotext (e)”, which take over.

What are these journals about? “End of man” and “dislocation” of writing around Derrida, death of the author and controlling society in Foucault, instinctual devices encompassing individualities with Lyotard, and the first celebrations of “line of flight” and “schizo” subjects around Deleuze and Guattari ”.

Derrida, Foucault, Lyotard, Deleuze, Guattari, Lacan, Althusser, Cixous, and a few others, here are the philosophers who, quietly, are entering American campuses via the literature departments

But we’re not going to stop there.

“In the years 1975/1980, its success will quickly transform the French Theory (as it will be called from now on) into a major ideological and institutional stake, notes Cusset*. And, in the context of increased competition between campuses through conferences and guest stars, it will be the subject of an unprecedented escalation between universities …. As with team sports, each university is forging a specialty that ‘she intends to impose on the national market: deconstruction of Yale against literary epistemologist of Cornell, psychocriticism of Harvard against postcolonial of City University, neohistoricists of Berkeley against Derridians of Irvine, neoaristotelians of Chicago against moralists of Stanford, etc … ” .

Almost without their knowledge, philosophers who sometimes do not know each other, quote very little, have published almost nothing together, see, by misappropriation, their ideas transformed into a real corpus which takes the name of “French Theory” , and become in turn and unwittingly … stars of American campuses.

But to get there, it took a few sleight of hand.

An still a metamorphosis

To give all these authors the appearance of a homogeneous corpus, it is necessary to lend oneself to several contortions. From a technical point of view, it is a question of “tearing away” then of “gathering”, that is to say according to Cusset, “to appropriate these texts, it is necessary to move the themes of them … to divide them. of their memory and of the context they convey … then bring together the unmoored texts … and deploy them in an unprecedented community of language ”.

In practice, how to do it?

We can use editorial procedures, publish texts in the same collection, or in a catalog of publishers, in order to give the impression of “intellectual promiscuity”.

We can “invent a label, the sui generis creation of an intellectual family“, by bringing together proper names, “as did the most famous collections devoted entirely or in part to French theory”.

You can stage a dialogue between two authors by citing the only reference they have ever made to each other.

We can insist on the few texts written together by two authors, such as Deleuze and Foucault, by publishing and re-publishing them, making the text famous.

You can write voluminous prefaces and postscript, notes and interstices. “They place in key points of the new corpus cross-texts, extracts which respond to each other, and some fetish formulas extracted from their context which the various commentators will decline in turn“.

Moreover, notes Cusset, the difficulties in translating texts (“confession” or “device” in Foucault, “game” or “inset” in Derrida, “jouissance” or “partial object” in Lacan) “impose on the translator a metadiscourse of justification, self-criticism or prerogative, which immediately places it beyond its prerogatives ”.

We can also desecrate the French text by inventing acronyms that make the concept usable in everyday language, such as “DWEM” for Dead White European Males, or “decon” for “deconstruction”. “By seeking viable solutions to bypass the untranslatable, translators make this first gesture through which readers can in turn” live in the gap “, repeat at the reading stage a tinkering done before them by the translator.”

And we can use the quotes by sorting to convey a complex argument, the leaflet and returning it to his advantage. “The quotation ultimately forms the raw material for this intellectual composite called Théorie Française”. Indeed, “the quotes are the endlessly reusable materials of a changeable construction, which can be assembled and dismantled … and even by the young salonard who in turn assimilates them to complete his general culture with a” radical chic “touch.

In short, the French Theory was purely and simply invented in the United States.

“There is a mystery Derrida, notes Cusset. Less that of his work, whose opacity is nevertheless not absent, than that of his American and then world canonization. How could a thought so unassignable, as difficult to transmit as his, a thought that we would not know where to place … could it become the most profitable product that has ever been on the market of academic speeches … and either passed to the point in common parlance in the United States that it is found there in advertising slogans, at the microphone of television journalists, or as the title of a successful Woody Allen film, “Deconstructing Harry” (1997)?”.

The central concept, at least seen from the United States, in Derrida’s thought, is that of “deconstruction“.

To see this hypothesis of a “construction of the text around its voids … at work … we can quote this” deconstructionist “reading of an end of Wordsworth‘s poem, reported by the philosopher Arthur Danro:

“The reading is organized around an absence, because this poem of the passage to spring would unfold as an erasure of the sign” winter “, a key word absent from the poem”.

From there, any text can be deconstructed to give it its true underlying meaning, and one could even, as Derrida suggested at a lecture at the University of Virginia, deconstruct the Declaration of Independence.

But to deconstruct is also to attack the philosophy of the Enlightenment, the prejudice of clarity, the postulate of light of meaning, “of the articulation (guarantor of the established order) between a verbal repertoire and the world that” it evokes -homage above all to the autarkic obscurity of language ”. Everything against the white oppressor.

And Cusset chokes himself by adding that “a carteron of desperate scholars thus dares to wallow very textually, and very stubbornly, in the dark pleasures of opacity“.

Any text can therefore be deconstructed, we can show that behind the words is in fact hiding imperialist domination, always omnipresent. Objectivity does not exist, “all Western logic of representation is inherently imperialist, unwittingly, even in the text“.

For example, we can deconstruct management and cooking classes, or even according to Robert Mugerauer, the landscape. Full of delirium, Mary Cicora explains that Wagnerian operas would deconstruct their mythological sources, making Parsifal a “redemption of metaphor”.

Example: feminism and deconstruction. “The figure of the Phallus and the underground power of Law and the linguistic unconscious will only perpetuate gender hierarchies. Gayatri Spitvak, a fierce deconstructionist, “calls on deconstruction to reach out to these others (women, non-Westerners, victims of capital) to finally take up political economy, to make its theory of the text a practice of struggle, and even to build a bridge towards Marx by re-reading him too as a “deconstructor before the letter“.

Another example is colonialism. There, the critic Homi Bhabha invents the “portmanteau word” of “dissemi-nation to think of the possible nation of the dominated from its diversion from the dominant language and its migratory dispersion“.

Another example, “disability studies“, whose themes range from the stump motif in medieval poetry to the lack of access ramps to classrooms.

And Cusset adds: “whether one speaks the Derridian dialect or the Foucauldian dialect … there is no longer any discourse of truth, but only devices of truth, transitory, tactical, political“.

Nothing is absolute, everything is relative.

At the same time, the new ideologues of the minority question intend to codify behavior and language on campus; it is then the advent of political correctness, or, in short, the PC. “The ethical postulate is that ordinary language, insidiously performative (by producing its victims), unconsciously pejorative, would inflict suffering on minorities whatever they are“. For example, we should no longer say a deaf person, but a “hearing impaired”, or an “audibly challenged” and, as Richard Goldstein puts it in Village Voice, “ a man who is a little fat, short on legs and almost bald like me can now talk about himself, without really joking, like a person of weight, with a different stature and whose capillarity is in danger ”. Circulars distributed in universities denounce “the insult of discrimination and “Aesthetic insult” (lookism), latent racial insult (ethnoviolence), or sexual harassment in a budding relationship (date rape). A true newspeak à la Georges Orwell was born, as Cusset says.

As we have seen, for a century the American university has leaned more and more towards its functional mission of providing American companies with a well-trained workforce. Suddenly, literary studies had become the poor relation. But now ideological innovation and serious questions arise within it; that literary people become the champions of subversion. Divine surprise.

Literature departments are not going to stop there, and will then set out to colonize their colleagues.

First to pay the price, film schools. There, it is soon only a question of the “machinations” of the producer, of the “unconscious ideology of the spectator“, or of the “authoritative function” of the director.

Then, the deconstructors attack the law schools. Stanley Fish subjects legal principles to the double test of logical consistency and rhetoric. A new concept, “critical legal studies” invalidates the claims of the right to universal justice and criticizes the “misleading ideology of neutrality” in racial matters.

The deconstructors finally attack the theological faculties, Mark Taylor, a “Derridian Christian” proposing a “deconstructive theology” and a systematic rereading of the Bible.

But there is something the deconstructors didn’t foresee ..

To be continued …
Next article: The American softpower. Saturday February, 27th