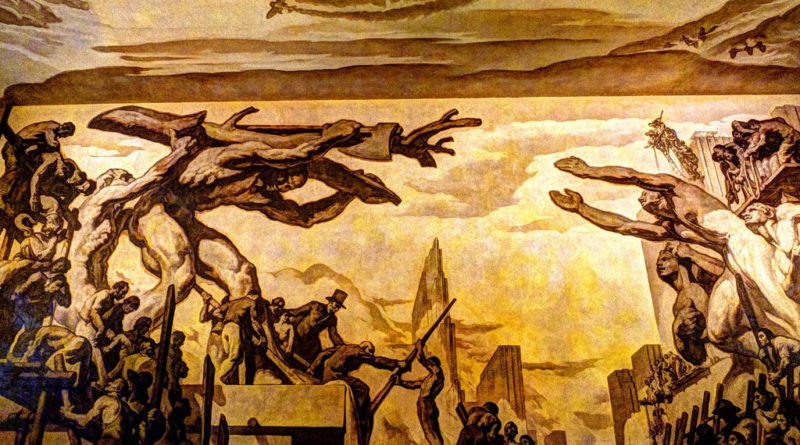 From the Comintern to the star-spangled banner

In the three previous episodes, we have seen how the literature departments of university campuses have become ideological stakes of American soft power.

Now is the time to turn to an even more unlikely area: that of art. Indeed, at a time when New York is the arbiter of elegance in the art market, a position that this city has taken from Paris, the undisputed leader of art until the Second World War, it is it wise to ask how this could have happened, and what ideological issues lie behind an activity so far removed from politics?

It all started on August 25, 1935, with the 7th Comintern Congress held in Moscow. Georgy Dimitrov, Secretary General of the Communist International and future President of the Council of Ministers of the People’s Republic of Bulgaria, proposes a strategy of collaboration, for tactical reasons, with the liberals, and an international alliance with the intellectuals. To succeed, it was necessary to seduce prestigious figures, well-known bourgeois artists, by rehabilitating the notion of culture, supposedly bourgeois; it was necessary to prevent artists and the middle class from falling into the hands of the fascists. This will be the policy of the Popular Front.

Suddenly, in France, the Communist Party is re-appropriating the Marseillaise, the Tricolor Flag, as well as the legend “of the soldiers of the year II”.

Just as much, this tactic also works in the United States, where the conscience of the artists becomes a major ideological stake. As Daniel Aaron, who was a Harvard professor, notes, “You could now be for social reform, for the Communist Party, for proletarian literature – for anything that was once radical, subversive, revolutionary, and downright chimerical. -and in doing so you were on the angelic side of politics; you were on the side of the Roosevelt administration, on the side of the workers, the blacks, the middle class … the victims of Hitler “.

In this context, Picasso, who adheres to the concept of the Popular Front, sends a letter to the Second Congress of American Artists of 1937, in which he says that “the Spanish Republic has taken all necessary measures to protect the artistic treasures of Spain during this war. unjust and cruel. As rebel planes drop incendiary bombs on our museums, the people and the militia, at the risk of their lives, have saved the works of art and made them safe … I believe that the artists who live and working on spiritual values ​​cannot and must not remain indifferent to a conflict where the greatest values ​​of humanity and civilization are at stake ”.

Certainly, André Breton, opposed to the Popular Front and to the alliance with the bourgeoisie, noted that, as usual, the bourgeoisie were in the process of saving works of art, that is to say the means of their own. domination. But roughly speaking, American artists followed the Communist Party.

From there, American writers and painters, until World War II, fluctuated from one side to the other, depending on the events that were occurring in the Soviet Union, some emanating from Moscow, others remaining. faithful against all odds.

From there, American writers and painters, until World War II, fluctuated from one side to the other, depending on the events that were occurring in the Soviet Union, some emanating from Moscow, others remaining. faithful against all odds.

Thus, for example, the Moscow trials of 1936-1938 shook some consciences, but 150 intellectuals and artists (including Max Weber, painters William Gropper and Stuart Davis, illustrator Hugo Gellert, etc.) published a column in the magazine New Masses, approving “the verdicts of the recent Moscow trials against the Buckarino-Trotskyist traitors”. The snake was certainly hard to swallow, but some swallowed it all the same (See in this regard “The XXth century, a century of iron and blood”, Season 1, Episode 3 “The court of flagrants delirium”, published on WUKALI on November 20, 2020).

In August 1938, for example, Trotsky published an article in the Partisan Review under the title “Art and Politics”. He wrote: “In a general way, art reveals the need of man for a harmonious and complete life, that is to say for the essential needs which class society has deprived him of…. new trend in art begins with rebellion. Art is the most complex part of culture, the most sensitive and at the same time the least protected from the decline and decadence of bourgeois society …. Art cannot escape or be cut off from the crisis … Art cannot save itself … it is for this reason that the usefulness of art in our time depends on its relation to the revolution ”.

And in the fall of 1938, the same Partisan Review published a text signed by André Breton and Diego Rivera, in collaboration with Trotsky, all three being together in Mexico. This text made a big impression on American intellectuals, because it united Breton, at the avant-garde of art in Europe, Rivera, at the forefront of the political fresco (See in this regard “Improbables destinies: La Malinche or the sources of a Métis people ”, published on WUKALI), and Trotsky, at the forefront of politics. “It goes without saying that we do not identify with the fashionable slogan:” neither fascism nor communism … true art cannot not be revolutionary, cannot not aspire to a radical and complete reconstruction of society ”.

Between communism and fascism, the manifesto proposed a third path: Trotskyism, an alliance between the avant-garde of art and that of politics. While Stalin was trying to get his hands on European and American intellectuals, this text undoubtedly annoyed him. He will end up having Trotsky assassinated in Mexico City.

But in the fall of 1939, a year later, the eyes of all these incurable naives opened up. The German-Soviet pact, the invasion of Poland, the entry into the war of England and France, all of these were troubling people’s minds.

The invasion of Finland by the Soviet Union was the last nail in the coffin. “The crisis which the German-Soviet Pact represented for American writers was spiritual, intellectual and moral”, writes Norman Holmes Pearson (“The Nazi-Soviet Pact and the End of a dream“, Knopf 1952). And the New Republic wrote that “people must have something on which to base their hopes and confidence; it is more than probable that the moral eclipse will cause them to turn more and more to this country – the last to remain at peace under democratic institutions “.

On the eve of World War II, the United States began to act as the last great democratic country …

Still, something had to be done urgently. Indeed, the Parisian art dealers held the upper hand and completely controlled the market for American painting. In fact, Parisian merchants enjoyed a monopoly in the American market.

“American artists could see that the buying of painting in New York was dominated by the agents of Parisian gallery owners, who, each time, discouraged their American clients from buying works of natives … any minor talent, if he was. listed on the Parisian “art exchange”, could more easily sell on the American market deceitful and perverse works than a major American talent could do for his sincere and well-made works “, writes Forbes Watson (” American painting to-day ”, American federation of arts, 1939).

So it was then that the Museum Of Modern Art (MoMA) appeared, which moved to a new, more prestigious building; for a first-rate museum in the United States had become an absolute necessity. This was the message conveyed by Paul Sachs, one of the seven founding members of the Museum, at the inauguration of the new quarters, declaring: “We need greater cooperation between museums and universities … the Museum Of Modern Art has a duty to the general public. For by serving the elite he will reach, much better than by any other means, the public at large … “(Paul Sachs,” Museum Of Modern Art Bulletin “, July 1939).

Because Paul Sachs was not just anyone. Her mother was the daughter of Marcus Goldman, founder of Goldman Sachs (an American investment bank of exceptional quality, dominating its market at the world level to this day, but hated in France), of which her father had been one of the “Partners“. Paul Sachs was also one of the promoters of the “Monuments Men” task force, which saved many works of art from destruction during World War II. He taught art at Wellesley College and Harvard.

Because if today a few dozen museum and gallery directors around the world, from New York to Paris, passing through London, Tokyo, Beijing or Shanghai, accompanied by a few large fortunes, mainly American, and soon Chinese, are making the rain and the good weather on the painting market, raising the price of the happy chosen painter, transforming art into a commodity like any other, this is perhaps where it is necessary to look for the beginnings of it.

The rest, Wednesday March 3 …
Season II /Part 2: On the Road to World Domination

Publishing calendar
At the dawn of the 21stCentury
By Jacques Trauman

Illustration matching with the title heading : American Progress by José Maria Sert which will replace the initially chosen work of Diego Rivera.