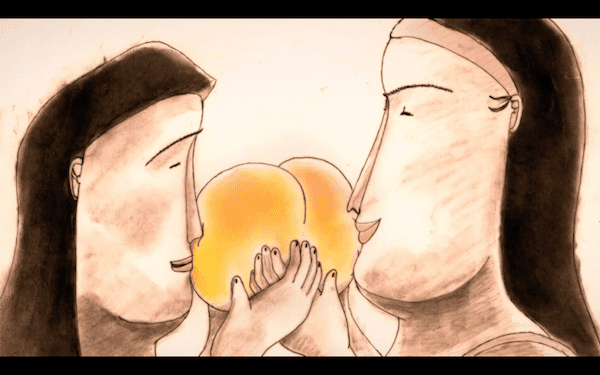 I’m beating my chest, I lacked regularity in writing for this section dedicated to animated films and which is so dear to my heart. Resolution 2022: I must imperatively get ahead for the next articles and write. I promise!

A Japanese film directed by Honami Yano 矢野ほなみ and the Tokyo University of the Arts, Senju Campus Studio A, opens the new season, its title in English is Chromosome sweetheart (Sensyokutaino Koibit in Japanese phonetics) which could be translated in French as “Ce petit chéri de chromosome“, quite a program.

First of all, the visual expression and particularly the graphic one. It’s so good to find some style, some handwriting, a signature. Yes, good and original (the word has become furiously fashionable). Away from the digital techniques using only software often of the same conception and which trivialize, and there is the pitfall, the expression. A conceptual intelligence where the graphic unites with the digital without one or the other taking the ascendancy over the other. A writing certainly, but also an emotion with a touch of humor.

There are two paths in this film, like the music inspired by the Four Seasons that fills it out. On the one hand, groups of female characters and a male-female couple, on the other hand, a kind of pagan and joyful party where formatted chromosomes reduced to a larval expression copulate.

I always have a great affection for the graphic, pictorial and sensitive work in the field of animated films, and this film is in itself a demonstration of quality. Certainly the line gives an impression of humility, fragility, of attenuation of the figures, a drawing somewhat raw, a certain acidity in the rendering of the characters, but precisely, it is there where its strength lies.

The narrative is also to be underlined, a story of men and women, of a couple, a story of desire, enjoyment, pleasure and sex to express itself in the English way, and especially a story of freedom and tenderness as the director wanted it, who affirms her values.

The music and the sound design are also sublimely dosed. A rather pleasant sound fusion between a very jazzy reinvention of Vivaldi and the ticking of a watch that punctuates the march of time with its irreversibility.

Here is what the director Honami Yano says about her film:

When I was a student, I saw the shape of a human chromosome, and it looked like a person squirming and moving around. I wondered how this little human-shaped thing could determine our biological sex, record information about us and make decisions about us without our own will.

Then I started to imagine that I wanted to make a chromosome that looked like a person independently of the person, and make a group drama about this microscopic figure that is a very small unit. I wanted to make the chromosomes, which look like people, independent as people, and make it a microcosm as an ensemble piece, with the intervention of my own queer will.

Would you like to react to this article, or even if you are a film maker let us know your work, just contact me it will be a joy
Contact : paelevy@wukali.com

The man who was afraid of falling, a philosophical demonstration ?

Catharsis, a sexual assault as theme of a...