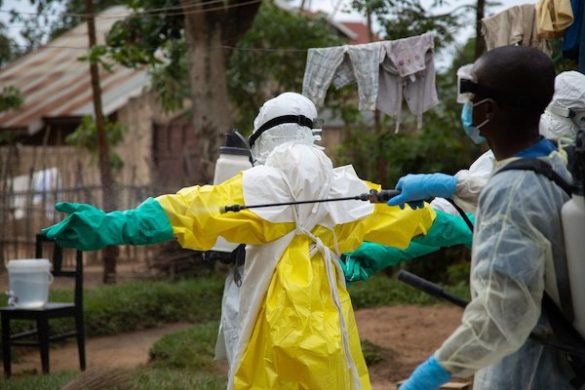 While packs of motorized morons on both sides of the Atlantic demonstrate against the sanitary constraints imposed by the epidemic situation linked to Covid, fortunately in laboratories and hospitals, researchers and doctors, the whole international scientific community, are working in order to flush out, understand, analyze, treat and cure the disease.

“Hear ye, hear ye, good people, great news: we have just discovered that man is mortal ! Such an information, such a new! To be serious which this Coronavirus cases what is more, there are so many lessons to be learned apart from epidemiology, and so many avenues to explore in terms of political science, sociology, education and ethics, and we will come back to this later!

Also, while we are tracking Covid on all sides of its epitopes, another virus is making news again: Ebola.

Ebolais without a doubt one of the most dangerous viral diseases facing humanity today. It is a hemorrhagic fever. Known since 1976, the Ebola virus has caused outbreaks in Africa, from Sudan to Sierra Leone. Its lethality rate, as we say in the jargon, that is to say causing the death of the patient, is positioned between 25 and 90%. It is a killer virus, hyper dangerous and especially newly appeared. The Ebola virus is transmitted to humans by infected animals, its natural reservoir is the bat. Cyclically it comes back.

Its genomic sequencing has been updated and vaccines have been developed to counter this disease. The surveillance of the epidemic in each of the infected countries is demanding, especially in terms of monitoring populations.

New information on Ebola was published on February 9 in the journal Science Translational Medicine. It confirms that infected cells could remain hidden in the brain without apparent trace for 17 months after an infected patient has been declared cured, according to a study conducted on 36 hat is the Ebola virusmacaque monkeys.

But what is the Ebola virus ?

These symptoms are followed by vomiting, diarrhea, skin rashes, kidney and liver damage and in some cases, internal and external bleeding.

The incubation period, i.e. the time between infection and the appearance of symptoms, varies from 2 to 21 days, but is most often between 5 and 12 days.
It is transmitted between humans through direct contact with the blood and body fluids of infected persons, or through indirect contact with environments contaminated by these fluids. The risk of transmission is nil during the incubation period, moderate in the first few hours after the onset of symptoms, and intense once the disease has taken hold.” Institut Pasteur definition

So what has just been discovered ?

Traces of the virus can remain in different parts of the body, including the testicles, eyes and brain.

The team treated the monkeys with monoclonal antibodies, which bind to the virus and prevent it from infecting cells; all treatments used in the study have been approved for use in humans. After treatment, the team tested the monkeys’ blood for Ebola virus genetic material, or RNA, as well as for viral RNA in the primates’ cerebrospinal fluid (CSF), the clear fluid that surrounds the brain and spinal cord.

The surviving macaques were euthanized about four months after infection so the team could examine the monkeys’ brain tissue and compare it to that of monkeys that died of Ebola. In the seven macaques whose CSF contained viral RNA, the researchers found Ebola RNA in the brain ventricles, the cavities in the brain where CSF is produced.

In addition, in the two monkeys that died, the scientific team observed massive tissue damage and inflammation. The presence of Ebola RNA in spinal fluid has been linked to at least one case in which a person’s infection relapsed after initial recovery, according to a 2021 report in The New England Journal of Medicine.

In the future, improved treatments for Ebola could include a combination of monoclonal antibodies and potent antivirals that can clear the virus from these areas of the brain, as well as the eyes and testes. This would reduce the risk of relapse.

The presence of traces of Ebola in the testicles would suggest that the most likely route of transmission from a relapsing Ebola survivor to another person would be sexual transmission via infected semen.  It should be noted that until now it was considered that the spread of the Ebola virus was primarily through blood, and other body fluids containing the virus with direct contact with the skin or mucous membranes of a healthy individual.

Catharsis, a sexual assault as theme of a fantastic animation movie