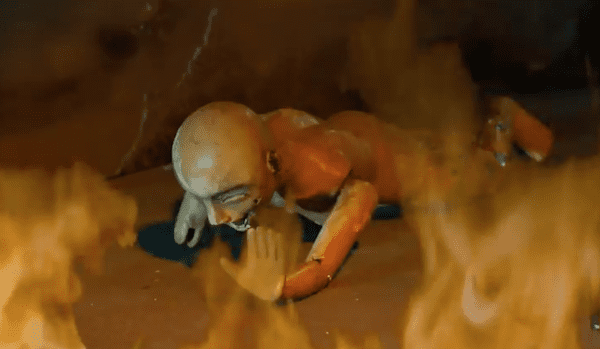 The very title of this film is indicative: Rootless Heart さまよう心臓, it comes to us from Tokyo. So, two boys playing louboutin in a stair hall, regulation outfit with hood required, even in Japan. They play the big man, one tags the walls while the other smashes the windows, we’ll see what we’ll see! One of them sees a door on the first floor, slides it open and enters a dark room. The door closes on him pushed by his mischievous accomplice who remained outside. Then the drama begins.

They are confronted with a disturbing, even frightening being. The little sister of one of them arrives. Thus all the protagonists are gathered to ensure the dose of anguish and fear in the depths of even the most tender hearts, the very principle of the fairy tale. The atmosphere is dark, the decor reduced to a minimum. Rather than drawings, the filmmakers, students at the Tokyo University of the Arts, 東京藝術大学, Tōkyō Geijutsu Daigaku, better known as Geidai(芸大), and directed by Toshiko Hata 秦 俊子, opted for wooden figurines. They are reminiscent of that whole playful world of little toy characters that are the joy of the young Japanese public and popularized today around the world. In order to thicken this feeling of horror that prevails throughout the sequence, some scenes of grand guignol and fright sanitized, at least for an adult viewer. Dismemberment (literally) of the villain. The fire scene is realistic. Everything works beautifully. Good job !

Catharsis, a sexual assault as theme of a...