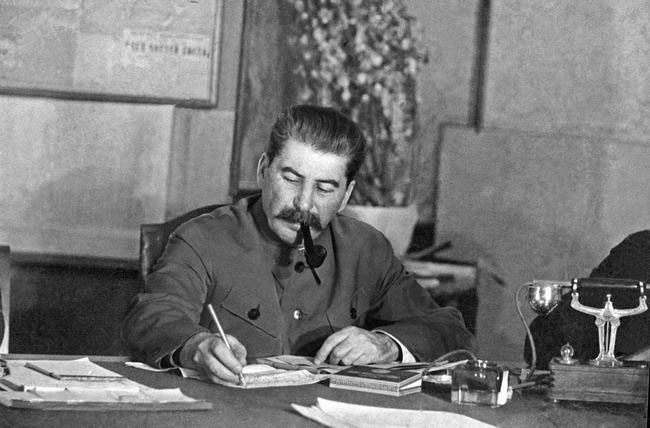 Such a nice team

Let us look back, however briefly, to the late 20th century, and we are overcome with an overwhelming sense of humility. This century, which was not that of the Enlightenment, but that of the triumph of deadly ideologies, left behind torrents of blood and tens of millions of deaths. Worse yet, it lured millions of people who believed that these ideologies would enable humanity to live better lives, sometimes becoming, and often all good times, accomplices in appalling crimes. In this regard, the record of French intelligence is appalling, it siding so inevitably on the wrong side that it is almost enough to align with its adversaries to be sure not to make a mistake.
Let’s start with Stalin, as described in “The Court of the Red Tsar” , by historian Simon Sebag Montefiore (*).

They were young, in their thirties, and they were in power in the Kremlin. We are in the 1930s, Stalin, their leader, 20 years older than this merry gang.

This small group of idealistic Bolsheviks was ruthless, they had set in motion a vast and terrifying revolution. They took themselves for god, and created a new world in a delirium of violence and murder. These men, members of the Politburo (Политбюро) for the most part, possessed, in principle, the qualities of a Stalinist commissar, namely Party devotion, morality, high standards, vigilance, and above all, as Stalin himself said, “nerves of steel”. . One of these potentates, Lev Kopelev, in search of grain concealed by the kulaks, will say: «  I have emptied the pantries of old peasants, forcing myself not to hear the cries of children and the moans of women. I was convinced that I was accomplishing the great and necessary transformation of the countryside». As usual, hell … etc …

Even Stalin was more sensitive to the friendship than one might think. Following a requisition expedition to Ukraine organized by Molotov, Stalin said to him: « I could shower you with kisses of gratitude for what you have done ». In short, these sometimes sensitive men committed the worst crimes in the name of a utopia, believing they were acting for the good of humanity.

They lived in the Kremlin, and the Kremlin, at that time, was a friendly place. « Oh, what a beautiful time it was,” Voroshilov’s wife recounts in her diary. What simple and friendly relations ! » . Stalin at that time did not inspire terror, he was colloquially called “Koba“, and he could be opposed without any problem. Mikoyan, who called him “Sosso“, once wrote to him, « If you are not too lazy, write to me ». Families visited each other, children played together, the Kremlin was a happy village.

We often dined at Stalin’s after work. A soup tureen was placed on the buffet and everyone was going to help themselves. The menus were simple, says Mikoïan in his memoirs: soup to start, then meat or fish, then some fruit for dessert. Nadia, Stalin’s wife, was there. All were inspired by their « Bolshevik modesty », of which they were proud. Since no salary could exceed that of a skilled worker, everyone was constantly short of money, including Stalin. The wives had difficulty dressing. Mikoyan, one of the twelve most important figures in the state, struggled to make ends meet with his five boys plus adopted children; he borrowed from everyone.

The Molotovs were more snobbish, criticized for never inviting their bodyguards to their table. Molotov was different. The 39-year-old was the only one of all these men to shake hands with Lenin, Hitler, Himmler, Göring, Roosevelt and Churchill; he was nicknamed “ass of steel” because he worked endlessly and never got up from his desk. He often corrected his nickname, saying that it was Lenin who baptized him “Iron Ass“. Small, stocky, with icy eyes, he was a sort of Robespierre within the merry band of the Kremlin. Cruel, resentful, recommending death to all who opposed him, he was harsh with his subordinates as with himself; for example, he would say to his assistants « I’m going to take a 13-minute nap », and he would wake up after 13 minutes. The door to his apartment was closed to his comrades.

Stalin ruled this little world, not by terror, but by charm. He was not a bureaucrat, but he weighed every decision carefully, working up to 16 hours a day. « He was, as they say, a man of contact, writes Montefiore … although incapable of real sympathy, he knew how to arouse friendship like no other … He constantly went out of his hinges, but when he decided to charm someone, he was irresistible … Stalin’s face was expressive and mobile, his feline movements, supple and graceful … everyone who saw him yearned to see him again because he made you feel that now a bond you united to him forever . »

After his first meeting with Stalin, the future Marshal Zhukov wrote: « The appearance of JV Stalin, his calm voice, the pragmatism and depth of his judgments, the attention with which he listened to my report made a strong impression on me ». Sudoplatov, a Chekist, said « it was hard to imagine that such a man could deceive you, his reactions were so natural, without the slightest visible affectation. »” This is the Stalin of the 1930s.

In addition, he was not lacking in humor. When he appointed Isakov commissioner of the Navy, the latter told him that this post was too hard for him because he was one-legged. Stalin replied « that the Navy was run by people without a head, one leg is not a handicap ».

But beware, Stalin at that time was not untouchable, and he knew it perfectly well. His comrades in the Politburo could perfectly well have outvoted him and ousted him from power. Stalin was perfectly aware of this; because the revolution he was setting up, turning the countryside into a real hell, was not unanimous. Stalin felt that disloyalty to him was on the rise. He began to ruminate, to become little by little paranoid; his radical policies led to opposition that made him suspicious to the extreme. « You cannot silence me or make me keep my opinions to myself, he wrote to Voroshilov one day. When will these attacks on me stop ? »

Because while the fine team of Politburo, in the Kremlin, bickered but had a good time, we deported and we massacred in the countryside. For them, the five-year plan would make the Soviet Union a power that the West could no longer humiliate, and to be successful it was necessary to eliminate the internal enemy, ie the rich peasants, the so-called kulaks. Lenin had said: « Let us launch a ruthless mass terror against the kulaks … death to the kulaks! ».

In short, we had to wage war on the countryside and liquidate the kulaks as a class.
The secret police got involved, leading to looting, brutality and the killing of millions of people.
In 1930-1931, 1.68 million people were thus deported. Kaganovich and Mikoyan organized expeditions with GPU (ГПУ) riders and armored trains … Desperate, the peasants destroyed their cattle, 26 million head of cattle and 15 million horses were slaughtered, and the Bolsheviks decreed that the property of the kulaks would be confiscated if they slaughtered their cattle. Terror and despair reigned in the countryside.

The saboteurs were then attacked. Speaking of a Gosplan official who was in the crosshairs, Stalin scribbled to his Politburo colleagues: « For all his past, present and future sins, hang him by the balls, and if the balls are strong and don’t let go, forgive him and prove him right, but if they let go, throw him in the river ». Charming…

One of the Politburo members, who was an excellent cartoonist, drew a drawing illustrating Stalin’s words, they burst out laughing. The Gosplan official was arrested and executed.

But even Stalin sometimes had doubts: « What exactly is a kulaks? » He scribbled one day.
However, death squad and concentration camps multiplied. Molotov classified 5 to 7 million people into three categories: « The first category is to be eliminated immediately. The second is to be imprisoned in the camps, the third is to be deported » . But what criteria to define? There were none. « The handwritten letters of these potentates to Stalin, writes Montefiore, vibrate with the fraternal emotion inspired in them by the war they are waging for the good of humanity against the unarmed peasants »: « We are taking all necessary measures for them. food and wheat », Mikoyan signals to Stalin, stressing the need to eliminate the saboteurs. « We are encountering strong resistance. We must destroy the resistance ».

In Kaganovich’s photo album, we see him roaming Siberia with his detachment of thugs in leather jackets, questioning the peasants, foraging in the haystacks, deporting the culprits and continuing on his way, exhausted, falling asleep between the stops. « Molotov works very, very hard and is very tired », Mikoyan wrote to Stalin. The workload is so enormous that it takes the power of a plowing ox. “
Ah, what a nice team …

The XXth century, a century of iron and blood
by Jacques Trauman

Fascinating Middle Ages, a new glance over this...