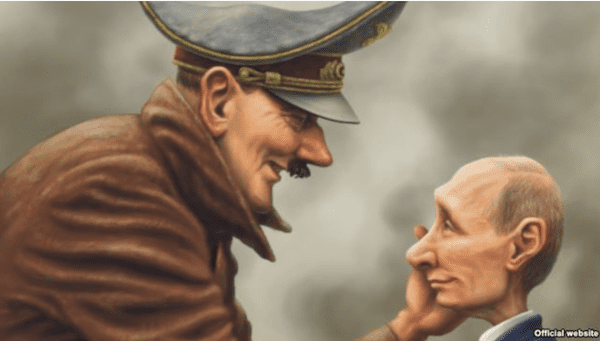 Caricature consists of detecting the characteristic features of a face, deforming them to make them the centrality of the subject, drawing attention to it and thus giving the character treated its strength and its tropism. Using the same subterfuges, the caricaturist considers a given situation, a range of events, makes analyzes and comparisons, draws cross lines, gives and establishes in a brilliant way a truth that words would take much longer to explain. “,A drawing, said Napoleon, is better than a long speech“. The cartoonist is an artist.

The caricature of Vladimir Putin which thus illustrates this article is thus perfectly understandable, its shortcut is immediate and summons to the most dramatic and terrifying hours of the 20th century. Thus Hitler caresses the face of his young disciple, Vladimir Putin… It was posted on the Twitter account of the government of Ukraine, well done!

To be more precise and faithful to the historical truth, the artist author of this caricature refers to those days which preceded the fall of Berlin, Nazism and the death of Hitler, when the latter, shaken by the pathological manifestations and nervous from Parkinson’s disease, accompanied by his followers, inspects a troop of Hitler–Jugend, near his bunker and taps the cheek of a fanatical teenager with his trembling hand.

“Comparison is not right” they say, and yet, you don’t need to be very learned about the tragic history of the 20th century to see similarities between these two characters and these abominable events that are happening today in Ukraine in the Eastern flank of Europe

Two dates, two barbarisms, two military invasions, two same brutalities, history stutters. The violence implemented, the staggering number of Russian troops massed at the border, Putin lying to all his interlocutors, to the whole world, these are the facts! Then the bloody invasion, the Russian contempt for the civilian populations, a country completely ravaged, massacred, destroyed.

A Russian soldiery committing war crimes, but also an astonishing unpreparedness of the Moscow army incapable of a blitzkrieg where Putin wanted to train him, his deficiencies in his command, his enormous human losses (almost equal in 2 months of war to 10 years in Afghanistan!).

Tragic preambles and a posteriori (as always) revealing. On one side the war in Spain then Munich and the invasion of Poland, on the other with Putin, the war in Chechnya, the war in Georgia, Syria and Aleppo.

Moreover, Putin’s above-ground speech aimed at the Russians, his propaganda in action when he talks about denazifying Ukraine.

Discourse and propaganda or how to manipulate individuals and peoples

It is most certainly through speech, words, harangues, references, that we can dissociate the seed of the dictator from that of the democrat. Without wanting to leave the subject of this war in Ukraine, however, some candidates in this current presidential election in France on the extremes of the political spectrum could be the subject of the same analysis, and emerge from this characteristic, on the one hand Le Pen and Zemmour, on the other hand Mélenchon, all three dangerous. In this regard, we will have the opportunity to come back to this in a specific article to come.

Among the many characteristics of the 20th century (and the time spent today is there to feed our reflection), the rapid dissemination of information is undoubtedly a phenomenon that will have contributed to establishing the power of dictators and tyrants. The radio first, then the image. This same phenomenon today is based on the internet and social networks.

So of Mussolini, of his boasting, his movements of the chin, this circus, his speeches (recall the film by Ettore Scola, A Special day with Sophia Loren and Marcello Mastroianni). Of Hitler, this monster, who used his talents as a speaker and the staging of his meetings to galvanize his crowds and make them lose their reason.

Putin acts the same, or more precisely acted, because his project of a new Tamerlane is old and certainly dates back to the very beginning of his political career. It is interesting, moreover, to observe, whatever the periods of history or of the immediate present, the psychic transformations of an individual agitated by the obsession with power. All this all the more so when he believes himself, rightly or wrongly, to be humiliated, when his social extraction is modest and poorly accepted, or when his “upstart” mentality has left him with some painful psychological traces.

The communist totalitarianism, like lustral water, in which Putin was born, the Manichean effects of the Cold War, his slavish adherence to ideology as well as his membership in the KGB secret service made the man. The collapse of the USSR, the dreams of an empire reduced to quia, then the accession to power accompanied by his Russian demons did the rest, as did the mythical desire that torments him to rebuild the Russian Empire.

Peter the Great’s dream was to anchor Russia to Europe. In 1717, he will spend three months in France to immerse himself in this French culture, this energy to create, to build, this art of living and these lights which are already gradually beginning to dawn. A dream the opposite of what was once called in a fin-de-siècle expression the “Asian peril”, that is to say the military and barbaric conquest. A Russian story where the Golden Horde and its epigones are never far from the steeples of the Kremlin.

Putin is the negative, the counterpoint, he deliberately makes war on Europe and throws hetaera winks at his cumbersome Far Eastern Chinese neighbor.

Democracy has three foundations: universal suffrage and free voting, the separation of powers and the independence of justice and, of course, freedom of the press. Not the least of these pillars exists today in Russia (as in China for that matter).

Over the course of his power, like a spider weaving its web, Putin distilled his venom, swept the Stalinist crimes under the rug (a few million dead all the same!), invented a patriotic pseudo-imaginary, even going so far as to establish a great national holiday where Russians are invited to parade with photos of their deceased who fought against Nazism and under the blessings of the Orthodox Church (as always in Russia in the service of power). Ah, what does he not speak of the people! (any reference with any French political personality, which cannot be similarly due to chance). Like all tyrants, and those who isolate themselves, he has built a self-centered personality that does not accept criticism or contradiction.

The character must very probably suffer from some inferiority complexes that he tries to compensate for with virile stagings where we see him hunting bears in Siberia, bathing while showing off his pecs, wearing the suit of a pilot of Mig or dressed in a kimono in karate outfit. His macho (and vulgar) discourse is of the same nature. He had thus one day said speaking of the Chechen rebels: “if they are in the toilets, we will kill them in the toilets! “. Ah, it feels good to have a leader who has…!

At the same time, and like all dissimulators, Tartuffe in the soul, he pretends, he dissimulates, clean on him, what! It merges into the anomie of the heads of world states and the greats of this world who gather in forums and who make news. Some even in France, is it not Mr. Mélenchon, see it as a bulwark to American power, and restoring national and traditionalist values, hello Madame Le Pen!

Beware of bites but also glasses of champagne and vodka

It is an old Russian tropism, that of political assassination and more particularly by poison. Thus, without even going back to Rasputin or evoking the Bulgarian umbrellas, many opponents of the current master of the Kremlin have been victims of henchmen who have never been identified to date. Oh good ?

Anna Politkovskaya is the 21st journalist murdered in 2006 in Russia since the election of Vladimir Putin in 2000, according to Reporters Without Borders… Boris Nemtsov, an opponent of Vladimir Putin, was killed, let us recall, on February 27, 2015, 11:31 p.m., on the Bolshoi Moskvoretsky Bridge, near the Kremlin. Pavel Sheremet, a Ukrainian, friend of Boris Nemtsov, also murdered by a bomb placed under his car in Kyiv on July 20, 2016. Sergei Skripal and his daughter poisoned in 2018 with Novichok, a very dangerous neurological drug. As for Alexeï Navalny, an opponent of Putin, an activist against the corruption of the regime, he was the subject of an attempted poisoning on the plane which brought him back from Siberia to Moscow. He was treated in Germany and then had the courage to return to Russia where he was immediately imprisoned before being sentenced to 9 years in prison which he is currently serving in a penal colony east of Moscow.

In this cavalcade of blood and death in Ukraine, the Russian army appeared in its true face, brutal and poorly organized. A speech intended for the Russian population presented this “operation” as part of the spring campaign, the affair of a handful of days. Ill-prepared, paradoxical victim of the rasputitsa, tanks and armored transports blocked and then destroyed by missiles fired from the shoulder by courageous Ukrainian soldiers determined to defend their homeland, a flagship Moskva, pride of their navy, sunk by the bottom in the Black Sea, and thousands of deaths among the Russian soldiers, here is really much, perhaps too much to accept for the Russian people and especially its army… What reserve the times to come, May 9 will be- she announced the celebration of victory and the Red Square the scene of a flawless military and patriotic demonstration, very clever whoever could predict!

But the vast majority of the Russian people are anesthetized and dumbed down by censorship and propaganda.

“I know my enemies, my friends I dread them…” Attention, Mr Putin!

You can get the original text in French in clicking top page on the French flag
WUKALI is a French website magazine, free access

The XXth century, a century of iron and blood. Stalin’s wishful thinkings about USSR and Nazi Germany. (Season1/ episode 4)