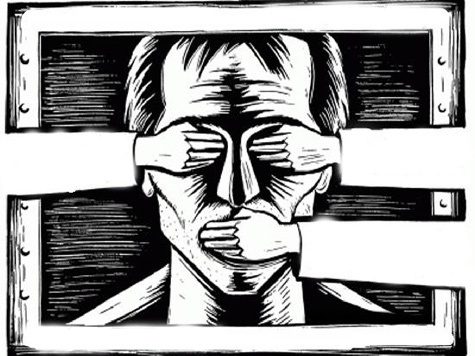 Nothing new under the sun and if a donkey is not a racehorse, it is well known, Putin is not a democrat and Russia, under his thumb, alas, alas, alas, follows the same! The Russian artists, spiritual emergence of the freedom of expression of the country, already pay a heavy tribute to the totalitarianism which rises from the policy of the master of the Kremlin. When Vladimir threatens, the courtier cohort takes up in chorus and it is up to the one who will make an assault of the most reactionary spirit against the “Other”, that is to say the one who is different, who contests and who opposes (in the current French language we would say “facho“, but the meaning of the words is diluted in this perverse relativism which engulfs us).

Let’s admit that if this is by no means a Russian characteristic (our history of art is full of censures, bans, intolerances, trials and condemnations, let’s remember at least Baudelaire’s Les Fleurs du mal or Manet’s Olympia), the air of the time that reigns in Moscow is rather nauseating and the “Putinian” conformism (as one would say “Stalinian”) is the order of the day. The trumpets of fame are well and truly blown, and it is up to the one in the circles of power who will show the most intolerant spirit expressed in the most furious, narrow, even fanatical terms to please the doxa printed by Putin and his megaphones on Russian society. Outside the Church there is no salvation, and we all know what this reference carries within it. It is the same in the Moscow East, one could say…

Before going on to the Russia of today, let’s come back for a moment to Baudelaire, “The Albatross” more precisely, in a very short explanation of the text.

“Les gouffres amers“, (the bitter abysses) to begin with, could be seen as a metaphor for society and whatever its national attachment.

And as for the last stanza:

All is said there and directly without precaution, poet, artist, what does it matter, the same domain of semantic function! Alas, the bird in this case can also fall victim to the archer’s arrows and this is precisely what refers us to what is happening in Russia today. As for the “giant’s wings” (ses ailes de géant), we could very well imagine a sequence of an animated film where we would see a weakling Putin, running and fleeing under the shadow of the wings of a bird which overhangs him. Maybe the dove of Liberty ?

Russia, a poor country, a poor people not used to freedom, a short break at the turn of the 20s (1920), a prolific time when creation unfolded and multiplied and where painters, poster artists, filmmakers, musicians, graphic designers seemed to hurry to deliver their imaginations. But Stalin is there and watches and soon the country will close in on itself and like Saturn, will devour its own children. The beauty of communism is not it, this infantile dream of proletarian revolution, brought out of its hell (mixed with summary executions and relegations in camps), and brought up to date today in France by this delicious Mr. Mélenchon, but let’s move on!

Thus in Moscow, to create, to propose to the world his vision, his perspective or his dreams is not an easy thing for the artist. In this respect some artists are the target of the arrows of power. Aesthetics, morality and politics do not mix well! In this regard, at the famous Tretyakov Gallery (Государственная Третьяковская галерея) a retrospective devoted to the non-conformist artist Grisha Bruskin has just been closed and suspended sine die without any explanation. It was possible to see Scene Change, an installation formerly presented at the Venice Biennale in 2017, and which according to its creator illustrates the relationship between society and the authorities. Indiscretions reported by the online journal Artguide suggest that the order was directly given by Olga Lyubimova (Ольга Борисовна Любимоваla ) Minister of Culture!

Another artist, and not the least in the west of the Urals, Oleg Kulik, is also threatened by the Putin rooks. The object of the crime is called Big Mother (2015), and was presented at Art Moscow Fair Ярмарка современного искусства. The putative sons of Béria (“putative“, “putinian“, “decidedly it starts badly! French private joke on language ) indeed consider that this work constitutes in itself a “rehabilitation of Nazism”.

Would it be a sudden flash of literary inspiration that would have titillated and seized these censors considering this title and bringing it closer to that of Orwell’s book?

Oleg Kulik was summoned by the Investigative Committee of the Russian Federation (Следственный комитет Российской Федерациии) for having mocked with his installation (according to the censors) the statuary group The Call of the Motherland commemorating the Battle of Stalingrad in Volgograd. What do we see: a female and central figure advancing, a sword in the hand carried vertically. No more, no less!

“Denazify” (in Russian денацифицировать), this verb being today really trendy on the side of the Térems or Belvedere palace where our dearest Vladimir lives. Because such is the leitmotiv trumpeted to all the winds of Holy Russia. It would take a contemporary Brecht to ridicule this dangerous and above all absurd regime!

For the nationalist deputy Zakhar Prilepine (Захар Прилепин) and some other emulators of an order with the thumb of the Kremlin, this work is an apostasy, a scandal, a disavowal, a moral defilement, in a word, a work of the devil, of Satan that is to say, in short, the fruit of Hitler’s heirs! One pinches oneself, one believes to be dreaming if that were not alas true! It is true that if Oleg Kulik is a Russian artist, he was born in Kiev and he kept and maintained very good contacts there…

For the artist, it is a shock, a trauma, he took 3 years, no less to realize his work today target of the ultra nationalist and ideological alliance of the power in place. “If I had ever thought for a single moment, even for 10%, of the interpretation that today is made of my work, not only I would not have presented, but even less envisaged nor created” he said to the magazine The Art Newspaper Russia. It is important to know that he is facing 3 years in prison.

Other artists, when they are not imprisoned, have the courage to demonstrate, they are not the only ones by the way, some young people from the Millennium (which is very good because they have only known this political regime) relay the fight for freedom and also demonstrate before being clubbed and arrested by the police.

The invasion of Ukraine on February 24, sorry, THE WAR conducted in Ukraine under the order of Putin, has provoked consciences in Russia.

Daria Apakhonchich knows something about it, she who was already considered as “enemy of the state” and arrested on January 31 when the police henchmen at 5 am knocked on her door and were about to break it down using an electric circular saw. She only had time to send a warning message via FaceBook (click).

What was she accused of? For having contacted foreign journalists, for defending migrants and refugees, for raising awareness about environmental protection, for standing up when ridiculous and iniquitous laws were passed and, above all, for raising awareness with the relay of her FaceBook application. Have we never heard in France our extreme leftists, so quick to defend the widow and the orphan all over the world, (names, names…!) vociferate (definition: to attack with anger by a harangue) against the political repression in Russia? You all know the answer: no way!

A leaden yoke, the freedom of expression prohibited, a monstrous tool of propaganda which perverts the minds and the consciences, a people subjected to the delirium of a paranoid head of state… In addition, and whatever one says in Europe, a perverse and underground influence in certain rare Western circles still impregnated, and in spite of the collapse of the USSR and Stalinist communism, of an image made to measure for consciences in search of intellectual and political paternity!