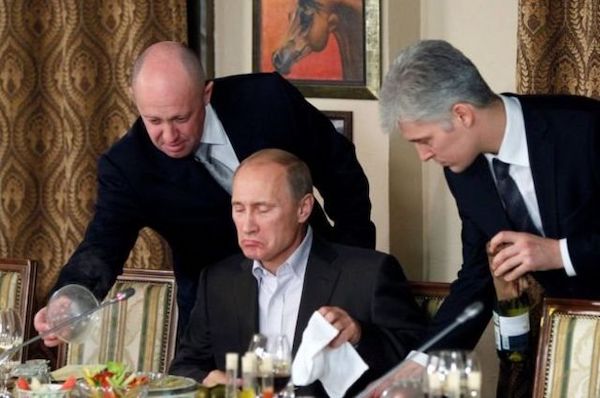 Dear Vladimir Vladimirovich, will you have your evening snack in the large Iossif Vissarionovich Stalin Salon*, the Marshal Gheorghi Zhukov Suite*, or on the west terrace of the palace overlooking** this beautiful cape of Gelendjika? The Black Sea is so beautiful this evening, a light breeze coming from the open sea brings heady perfumes ?

-We have also just received, I am very happy to tell you, some very beautiful fish, you will like, Vladimir Vladimirovich. If you wish, we will prepare them to your taste, as usual. You will tell us what wines you would like to drink, a Crimean wine perhaps, our motherland, or one of those famous Corton Charlemagne whites from those damned French?

Under the sun still high in the sky, Putin’s Palace the residence of Cape Idokopas ( Резиденция на мысе Идокопас) on the Black Sea, stands on a hillside near the village of Praskoveevka (Праскове́евка), not far from Sochi. A neo-Versailles for megalomaniacs. This is where the autocrat is resourcing and resting to forget the offensive in Ukraine, this crazy adventure, this aborted delirium that only he decided, with those tens of thousands of young Russian and Ukrainian soldiers that his imperialist and conquering hysteria sent to death. What’s more, an armed force dislocated against all odds, weapons destroyed, a humiliating exposure. Will the Russian general staff be able to accept this without blinking?

The obsequious tone of the butler, does not make illusion. Putin manages to put on a good face in difficult situations. He was taught this a long time ago when he was still a young KGB officer, and it is a prerequisite! He knows that the ground is now soft under his feet, and that all those who bend under his gaze would be ready to turn around and betray him. Even the Army, if it is possible that some generals are gangrenous by the CIA!

Nothing is going well anymore, the propaganda is stirring up its venom and the television programs exalting an inane and worrying nationalism, everything is deteriorating in the country, he knows it and it is bothering him. The economy is collapsing, the intellectual elites are leaving the Motherland, and the trust he may have with Xi Jinping, the Chinese neighbor, to support him, is only a façade.

His political allies, plus a gang of mafiosi, oil corrupters, affidavits like the Chechen Ramzan Kadyrov, or clients like the ridiculous Marine Le Pen in France (click) and the populist and ideologue Mélenchon !

“It doesn’t matter if a cat is white or gray, the important thing is that it brings back mice” said Deng Xiao Ping (希贤 ), ah those damned Chinese, always them!

In the deep country, thousands of Russian families are mourning the son, the brother, the husband, who will not return. The Russian tragedy par excellence that is renewed. Despair slowly spreads, slowly, but still silent and cold as a blade, it now spreads like a pool of blood. Fiasco of a setting under tutelage of the opinion near which one praised a nationalism and where reinvented the history, the big one, the one with a big H. ” The Immortal Regiment ” and the families went out and paraded in the street displaying the photo of a deceased, killed during the Second World War against the Germans, against Hitler, against Nazism, once upon a time, with Putin, still him, at the head of the procession.

During his reign, never, never a word to condemn the crimes of the USSR, of the communist regime! Silence on the Zeks, the deportees of the Gulag, the prisoners building in inhuman conditions and in Siberian temperatures well below 0°, the White Sea Canal (Беломо́рско-Балти́йский кана́л), or all those who were arrested and then tortured in Lubyanka prison. Silence! No repentance as we say in French, no courage of responsibility. Collapse of the Russian model.

The Katyń massacre on Stalin’s orders, not a word in the history books. Thousands of Polish officers and intellectuals killed with a bullet in the head. For a long time, this imprescriptible crime will be passed off as a Nazi crime. Ah the glorious Red Army, the one from the battle of Kursk ( Курск), (Kursk, did you say?), the Patriotic war! “The bigger the lie, the more likely it is to be believed …!” said Goebbels once upon a time, we have the references we can!

The weak point of tyrants, their inability and their violent refusal to establish a dialogue with the other

It is still necessary to detail all the attacks on freedom, the repression against journalists, artists, (click) against all those who oppose this dear Vladimir. We have devoted many articles to this. Let’s remember all these mysterious assassinations of opponents and journalists, the use of poison, the anomia on the subject, and the censorship now present everywhere. Even the vocabulary is censored, the word “war”, in Russian война when it comes to the War unleashed by Russia against Ukraine, is simply banned from use! “The nose” by Nikolaï Gogol is back in action.

The image of Vladimir Putin is conformed to what he is, that is, the fruit of a certain Russian tradition. A certain tradition, not the one of all Russia, fortunately!

A land tradition, continental (all summarized in the thought of Fernand Braudel – Click- ), that is to say turned towards conservatism, withdrawal, nationalistic thought, the mystique of the land. Indeed, Russia is above all a continental country which extends from the west of the Urals to the Siberian taiga of the Far East, and the forest is at the heart of the Russian soul. The maritime tradition is irrelevant. How can one get rid of this impregnation when the only opening to the world was a training in the KGB in Leningrad in a subordinate position.

This is the tragedy of Russia today, Vladimir Putin and his cronies have shown themselves incapable of analyzing the evolution of the contemporary world after the fall of communism, that is to say an absence of economic and prospective thinking for the development of their country. Just as serious, their matrix impotence and openness to the world, made them opaque to the ongoing revolution of information and communication. They have only seen its defects but have been unable to measure the factors of progress, which are however, and by far, more important. They did not understand this formidable dynamic of drive, this synergy, that represent precisely the freedom of communication and information, notably embodied by the Internet.

Their world is an obsidional one, that of the besieged fortress, as in the days of the Cold War. As for Freedom, and in particular the freedom of speech, it is rotten food for these French pork-barrels!

How is it that a country as vast as Russia, rich in mineral resources and endowed with quality academic institutions, is ranked 12th in the world, and this long before Russia’s war against Ukraine! The momentum, the managerial dynamics, the entrepreneurial spirit, the prospects of personal emancipation and the absence of freedom are simply absent from the Russian universe under Putin’s rule. The garajniki, these small entrepreneurs, these creative inventors, have lost all hope!

There is not the slightest doubt that the consequences for Russia of this crazy military march forward, of the war, since it is necessary to call things by their name in spite of the censors (Hello Anastasia!) will be catastrophic for Russia.

Emmanuel Macron was quite right in a conversation made public with Vladimir Putin, to underline and denounce, not only his deceptions and manipulations, but above all his lack of historical vision for his own country, and that is the tragedy! Thus Russia, through his fault and his imperial and totalitarian will, is beginning a process of loss of power and disintegration in its development (aggravated by a catastrophic demographic erosion) and whose consequences no one can measure yet. Its image has been diminished for a long time and China is smiling.

–Vladimir Vladimirovich, would you like to have some of those little sugar cakes you like so much…?

–But why do you want to have them tasted by a guard of your protection first…?

* We do not know the names given to these sumptuous reception rooms in Vladimir Putin’s residence. Their chosen name seems to us to be in conformity with a certain reality…

** Read the article about the architect of the Putin Palace (click)

Header illustration: Vladimir at the table, on his right his faithful Yevgeny Prigozhin, master of banquets. Photo: The Oboe New Times

To read this article in its original French version, pease click on the French flag up page