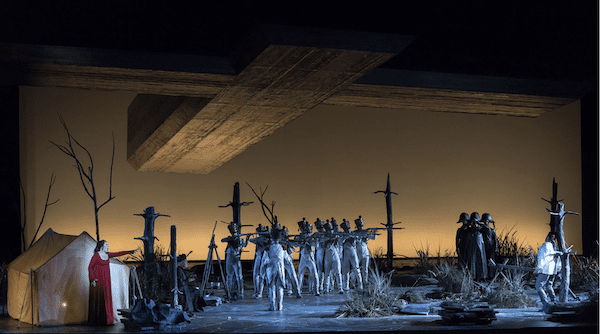 I was looking forward to seeing Tosca at the Opéra Bastille this Saturday, September 3. Having discovered Gustavo Dudamel, when he arrived from Venezuela with the Simón Bolívar Orchestra to play South American composers and Bernstein with infectious enthusiasm, I had seen him ascend with delight to the helm of the Los Angeles Orchestra and that of the Opéra Bastille, and I wondered what would remain of that ardor in the imposing Parisian institution.

The program also had another attraction, Bryn Terfel. Already admirable as Falstaff or Don Giovanni, in which he mixed darkness or truculence with his acting, I was eager to see how far he would go with Scarpia. I had read the biography of Soia Hernandez, who would take on the title role, to learn that she had studied with Renata Scotto and Montserat Caballé before singing Norma and Imogene in Bellini’s Pirates, and that of Joseph Colleja to learn that he had been Riccardo in Verdi’s Masked Ball and Don José in Bizet’s Carmen, before singing Cavaradossi here. The evening was thus well announced.

Beginning behind the gauze of a curtain, Angelotti arrives in a hurry, thin, with long hair and dressed in black on an imposing black cross dividing the stage into a place of prayer on the left and a painter’s studio on the right. Interpreted by the Belgrade tenor Sava Vemic, he goes down to the candelabras to look for what a compatriot left him to escape the police. The good-natured sacristan of Renato Girolami follows, who would gladly steal Caravadossi’s basket. And Caravadossi that soon sang; first flat. Unfortunately, his singing is not up to scratch, spoiling his arias from the first act. Then came Soia Hernandez’s Tosca, which was heard backstage, and with it, the second flat. More Wagnerian than Puccinian, she sang with force, missing the touching and therefore the identification with her character. Fortunately, Bryn Terfel arrived. Staying in the corners to stare and to stir up with a gesture, a found object, a word the jealousy of his prey, he dominated the first act and soon the second. Going up on the cross at the Te Deum to receive his blessing, he was already rising like a wave.

If the cross of the church, of the scenery and of the clothes crushed the first act with their otherworldliness, the second was dominated by the red of Scarpia’s apartment. Surrounded by the pale light of a corridor and overhung by the imposing cross of the first act, it was luxuriously furnished with a sofa, a chaise longue, a table and a bust of a Roman emperor. The collaboration of Robby Duiveman, the costume designer, Jean Kalman, the lighting director and Christof Hetzel, the master set designer, is to be commended. The difference in quality between Terfel and his colleagues shines through here. When Soia Hernandez, with her forceful tackling of moments without their continuity, did not manage to move, and when Joseph Colleja did not do much better, while he was under torture, Bryn Terfel, in the line of Tito Gobbi and Cesare Siepi, made the perversity rise with an inflexible, playful and oil-spilling singing and acting. He dominated to such an extent that Scarpia’s death brought down the vocal quality in the last act.

Under the white light of a military camp dawn, Colleja fails to be touching in her final E lucevan le stelle, and Soia Hernandez, who should believe in her lover’s life as he is put to death, did little better.

Fortunately, Dudamel‘s orchestra enveloped the drama from beginning to end. Knowing how to link the lyricism of the duets between Cavaradossi and Tosca to the harshness of Scarpia, he gave a beautiful musical coherence to the opera.
It would probably have been preferable to choose a Caravadossi of Sava Vemic’s age and an Angelotti of Joseph Colleja’s age, if not to swap them, because of their vocal tessitura… Nevertheless, Dudamel’s breath, Bryn Terfel’s firmness and the beauty of the scenes made this evening an unforgettable moment.