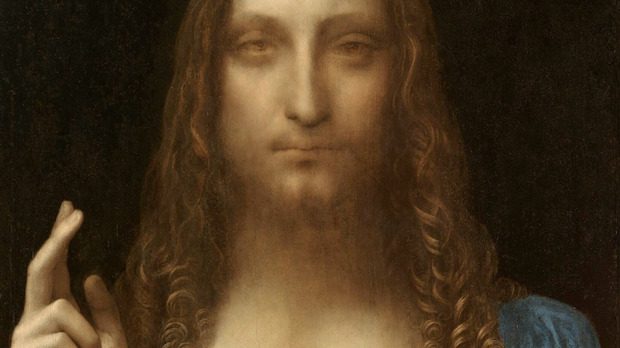 We had already in WUKALI, and on several occasions (and this from November 2017), dealt with the question of the disputed attribution of the Salvaltor Mundi to Leonardo da Vinci. The sale price is simply astounding for a painting that was not unknown ($ 450.3 million in the same!), Infinitely reworked, and whose course for centuries is perfectly documented. We had done it freely, in conscience, without accepting any pressure, with rigor and with our knowledge of Leonardo’s work and our gaze. We were among the only ones to dispute this attribution when others then opposed this discovery, probably inhibited by the astronomical price which dumbfounded them.

Thus on this subject are gathered, the world of art, big money and the planetary economy, without forgetting diplomacy far from it. That is to say almost all the ingredients combined to make this story a disturbing tale where the greatest conservation authorities (those of the Louvre museum in this case) are opposed by a disparate areopagus with interests so far from their concerns. scientific and cultural.

The experts sharpen their arguments with conviction, put forward the evidence they recognize to affirm their expertise whatever their conclusions. They even happen to oppose each other!

It is fair game and rather healthy, perfectly academic, in accordance with ethics, without dogma, and letting intellectual doubt rule scientific reflection while respecting the history of art. Thus we have seen in the past new attributions of authorship of a work, such as Giorgione’s Storm, long attributed to Titian (and these are not the only ones).

It is even enough to summon Leonardo in a novel or in the title of a film, and suddenly it is a generalized frenzied hypnosis. Remember the smoky Da Vinci’s code of the singular and specious abode Dan Brown. A planetary best seller! “The bigger the lie, the more chance it has to be believed *” once said a sinister character in uniform.*

Today even who to believe (although it is not a question of belief, but of advanced proofs)? What expertise, are there pressures and of what order? Diplomatic, financial? Behind the institutions (and of the most respectable we would like to point out) a secret war of contradictory expertise.

To give a little light and perspective to this whole affair, we republish the articles that we had devoted in WUKALI on this subject and whose titles were Controverse sur un Léonard de Vinci vendu 450,3 millions de dollars by Pierre-Alain Lévy, the other signed by Jacques Tcharny:  Le Salvator Mundi attribué à Léonard de Vinci, réalité ou colossale escroquerie financière ?

Controversy over a Leonardo da Vinci sold for 450.3 million dollars

Media for sure, and this intrusion of a classic work in a highly publicized sale in New York, in the midst of those of modern painters, has caused a lot of talk to say the least!

– Tactical, certainly, because this Salvator Mundi whose existence we have known for a long time has always left behind him the impression of (let us choose the words well …) of being a work of workshop, that of a gifted pupil certainly, but in any case not as being of the hand even of Leonardo.

– And undoubtedly financial, and all the more so when we discover the astronomical price reached during this sale, an absolute record or $ 450.3 million …

This Salvator Mundi is not a mysterious asteroid that suddenly fell in the middle of a cenacle of experts, art historians, museum curators and we will not also forget astute merchants.

Its history has been famous for a long time and it has known at least a number of vicissitudes. It is true that when we roll our shoulders to assert ourselves and want to share the heritage destinies of those whom we consider to be our peers and to whom we aspire, we must expect resistance, to put it mildly, hostility. When the child appears, no offense to Hugo, the family circle does not always applaud loudly! It makes you think a little (and without wanting to be mean), of those starlets passed under the hands or the scalpel of a cosmetic surgeon to have their nose and mouth redone … Because yes it has been well retouched and has wanting to save the world we sometimes lose our soul.

Back to basics and history

The Italian Wars lead the kings of France to extend their kingdom across the Alps to the kingdom of Naples and the Duchy of Milan, they clash with the Spaniards duly installed in their possessions and the Italian lords. These wars begin with Charles VIII, and the “francese furia” impresses, then will continue with Louis XII (later with François Ierand Henri II).

A sacred character Louis XII (1462-1515), who will also be the husband of Anne of Brittany, and it is he who will buy this Salvator Mundi.

The commentators on this painting attributed to Leonardo are divided into two camps; for some it would have been painted during the Milanese period of Leonardo, that which followed his departure (his flight) from Rome in the 1490s, for others it belongs to his Florentine period (1500) and in doing so would be contemporary with the Mona Lisa.

We find this painting at the English Court in 1625, it was brought in her luggage by Henriette Marie of France the wife of King Charles I, she also brings to Hampton Court then in her Greenwich Palace a number of precious objects. The English civil war will force her to return to live in exile in France.

Mention is made in a royal inventory of a work of Leonardo endorsed by an act of Parliament dated March 23, 1649. At the same time a famous printer of the time, Wenceslaus Hollar, publishes an engraving representing this Salvator Mundi with the mention “Leonardus da Vinci pinxit”. The engraving is published in Antwerp and copies are sent in Paris to Queen Henriette Marie

The English civil war is over, the Cromwell episode is over, King Charles II finds his throne. The last buyer of the painting, a certain architect named John Stone, returned it to the Crown. In 1666 a royal inventory listed it among the works belonging to the Royal Cabinet.

No mention of the work in the following times. It later became the property of King James II’s mistress, Catherine Sedley, Countess of Dorchester (1657-1717).

In the twentieth century

In 1900 it entered the Cook collection (Doughty House, London) and was attributed to Bernardino Luini (1481-1532), a pupil of Leonardo da Vinci. The painting undergoes “restorations” which alter its quality, the face of Christ and his hair have been repainted.

In 1913, it appeared in a catalog devoted to the Cook collection. Art historian Tancred Carl Borenius attributes this painting to Giovanni Antonio Boltraffio who worked in Leonardo’s studio.

In 1958, when the Cook collection was sold at auction, the painting then covered with layers of overpaint was sold for £ 45.

As time goes by, after much tribulation, the painting ends up in a second-rate auction in the USA. It is presented as being a copy. The new buyer undertakes to restore the painting. In 2007 it was restored by Dianne Dwyer Modestini from the Institute of Fine Arts at New York University. The work is then the subject of spectrographic analyzes which reveal in particular handprints on the forehead of Christ. It is submitted to the appreciation of international experts and up to Martin Kemp, a recognized and respected specialist of the work. of Leonardo and the Renaissance, who recognizes it as authentic and by the hand of the great master. Then in 2008 it was studied at the Met in New York and then by the National Gallery and compared with the Virgin of the rocks, solicited on both sides of the Atlantic and the curators of major museums give their opinions.

In 2011 Salvator Mundi hangs among the canvases of the exhibition Leonardo da Vinci, painter at the Court of Milan at the National Gallery in London

Many details lead us to consider that this Salvator Mundi is not in the hand of Leonardo, no offense to this agora of specialists who today celebrate the ghost. Too many details, and for some of them they are impressive (the globe, we will come back to this), encourage us to believe that this work with all its qualities that we readily recognize but also its glaring flaws could not be painted by Leonardo da Vinci.

Total absence of depth and thickness therefore no volumetric density

– Heavy face, expressionless, one eye smaller than the other, it is simply unthinkable

– No refraction of the garment behind the transparent sphere held by the subject: unimaginable with Leonardo. Martin Kemp we know, thinks on this point differently and considers that Vinci knew well the rock crystal and is praiseworthy as for the pictorial treatment. Our point of view considers that it is strictly impossible that Leonardo da Vinci in person painted this crystal globe and then did not take into account the distortion of forms induced by the crystal, by the optics, by the effect. magnifying glass. He was, moreover, such a perfect scientist, and in his time in particular, so as not to account for this distortion.

– Wrist and arm sticking out of the sleeve, heavy and unusual for Léonard

– Inert curly hair: no wind that makes it move: never forget the equivalence of the biblical word rouah (roua’h ha-kodèch) meaning in Hebrew both wind and holy spirit, which Leonardo knew very well

– As for the treatment of the chin, we can only be surprised that we felt for a single moment that Leonardo da Vinci could have painted it with such awkwardness!

– In conclusion, we do not know, it should be emphasized, whether studies have been undertaken to determine whether the painting is the work of a left-hander, especially since we know that Leonardo da Vinci was the only left-hander of his workshop, this could have gone a long way in supporting the thesis of authenticity.

We remain … skeptical (is that the word?)

But where did my cell phone go?