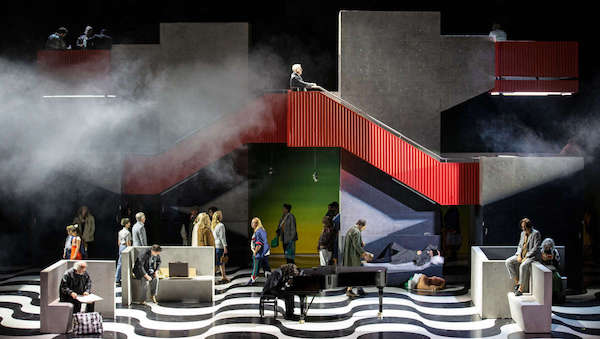 The glaucous Queen of Spades at The Monnaie theater in Brussels

There are performances that we would like to defend. The Queen of Spades at La Monnaie in Brussels had many assets. The tenors Dmitry Golowin in the role of Herman and Alexander Kravetz in the role of Chekalinsky to begin with, one Russian and the other Ukrainian, showed that evening, that nationalities that had become rivals because of an invading war could still collaborate. Sometimes, the arts give political lessons. Especially the conductor Nathalie Stutzman, who, after a successful career as a contralto, is now a successful conductor with the Kristinstadt and Philadelphia orchestras. However, the director David Marton wanted to stage the opera as a pianist’s dream in the late 1980s. This pianist, forced to work, played a few bars during the opening, before falling asleep on his instrument and participating in the drama, and the actors played in drab costumes in front of a neon-lit faux-concrete set.

The large number of extras in the first act also blurred the focus on the main characters. And the accents of the French-speaking singers were unfortunately also heard there. Fortunately, the excitement was concentrated at the moment of the mise en abyme. This Mozartian moment, like the death of the Countess, revealed the amalgam of qualities and defects of this staging. The two singers descend a concrete staircase before being crowned by an extra. Then came the knight imitating the Olympic swimmer Michael Felps with his head in his right elbow and his left arm outstretched, and insisted on his difficulty in kneeling down and getting up. And again that pianist, in animal skin this time, being carried backstage and to his piano.

The death of the Countess was played out in her room; here with a white floor with black curves on a large black and white houndstooth background, also painful to the eye. Anne-Sophie von Otter, who had remained discreet until then, showed the quality of her art. Lost in her glorious youth, only to come back to reality for a brief moment and return to her trance, she sang with a touching nostalgia. Her aria was one of the most beautiful achievements of the evening. This scene revealed, that the attraction for Hermann at that moment was probably not so much Laura, but the game. If the countess was in a kind of Alzheimer’s crisis, Herman was in need. By kissing the countess on the mouth, he was cherishing his drug and his receiver.

Herman is an ordinary man, as his name (“Mr. Man“ in German) and the clothes designed by the costume designer Pola Kardum attest. Dmitry Golowin indicated the rise of his obsession with a more and more marked inebriation, to the point of staggering when he thought he had the secret of the countess’ three cards in the last act.
But instead of dying of fright when she saw him with a pistol in her room, as the libretto would have it, the Countess followed a curve in the floor, walked peacefully towards Herman, while he threatened her, and died a good death at her feet.

How did the viewer also need the dance of the mise en abyme characters around the main characters afterwards? He also wondered how Count Tomsky could know that Herrman had drawn the wrong card, staying so far away from the game table.

Fortunately, Nathalie Stutzman’s orchestra saved the evening from its charm. Opera is traditionally the ultimate horizon for composers and conductors, because of its infinite instrumental and vocal possibilities. Tchaikovsky and Nathalie Stutzman are obviously no exception. The orchestra of The Queen of Spades describes the psyches of the characters in a melodic continuity of great refinement to compose the atmosphere of the opera. Herrmann’s obsession, Laura’s confusion and the Countess’s reverie are thus seamlessly joined, which the Monnaie orchestra conveys with great clarity. More than the staging, it was indeed the most faithful to the work, and the most beautiful success of the evening.

As Jacques Imbrailo, remarkably human as Count Tomsky in the evolution of his separation with Laura, the troupe of the Monnaie went to great lengths to save the evening, but the director’s vision spoiled the work. He made two serious mistakes: first, he wanted to make people say something instead of letting the work express itself, such as the invention of the pianist, whose graft did not manage to take hold, the dull sets and the use of a period, whose relevance remains to be demonstrated, and secondly, he emphasized instead of letting them understand, such as the dance around the main characters, whose dubious application was annoying by dint of repetition.

In the last issue of Opéra magazine, the tenor Ludovic Tessier criticized the abracadabre stagings in a time when spectators hardly come back to the shows. How right he is. Fortunately, there is music.