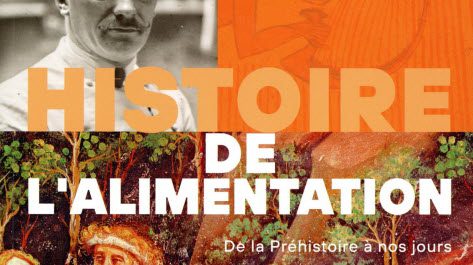 History of Food, a delicious, beautiful and academic study

An incredible and tremendous work carried out under the leadership of French historian, Florent Quellier, and presenting A History of Food, no less, published by Belin. Something all at the same time to make you salivate and saturate your minds all excited with pleasure!

To this point, it should in fact be known that for many decades, historians have studied and worked, often brilliantly, on the perception of what seems most obvious to us in our surroundings, in our daily life. In this way, one thinks of the history of sports, running, underwear, hair, forks, even of this or that fruit or vegetable, etc.

And yes, everything has a story, the perception that men had of it in the past is sometimes very different from ours. Everything has changed! Often back and forth and, what we believe to be obvious (and therefore permanent), was far from being in the past, if not decades ago and questioned afterwards.

What could be more trivial, but above all necessary, than eating. It is more than vital, from the first hour of our birth. But to eat what? Eat in what way? What are the rituals governing the meals: what differences between the French service and the Russian one.

Consequently, in the same way, each time is implied not only the rules of knowing how to live (and therefore of living together, the way of serving at the table is also an element of the social pact) but also a whole ritual symbolism that it is good to study and to know because together they allow us to better perceive society, its mentalities, its ways of being and of thinking.

More than fifteen historians specializing in the subject were brought together by Florent Quellier to offer us an impressive sum on the history of food. On the culture of food which has evolved enormously in time and space since Homo sapiens sapiens spread over the face of the earth. Man very quickly wrote about food, wrote learned treatises on dietetics, developed cooking recipes, codified good manners to be had at meals, paid often critical attention to the diet of “others”.

Thus, based on the latest historical but also archaeological data, the authors provide us with a history of food unlike any other before.

To this end, four parts make up this study: prehistory (human food undergoes a real revolution with the invention of agriculture and breeding); ancient times (Mesopotamia, Egypt, Ancient Greece, etc.); the medieval times in the West as well as in the East without forgetting Byzantium; and modern and contemporary worlds.

Hence, a new food revolution began with the discovery of America and its many fruits and vegetables totally unknown to contemporaries. This has given rise to much debate, often theological among Christians as well as Jews, as to whether these foods were edible. And one cannot imagine, today, Mediterranean cuisine without tomatoes or peppers!

In a word, tIn conclusion, he reader, in each era, in each existing society, learns not only the list of foods available, their way of accommodating them together, but also their dietary prohibitions, tastes (and of course, food dislikes), rituals of table and of course the drinks that accompanied it all.

From then on, you will learn all about the food of the winners of the Olympic Games (those of Antiquity not the modern ones) or of the Cistercian monks with Saint Bernard, but also on the souk of the confectioners in Cairo in the 9th century or the relationship between Charlemagne and Roquefort, etc.

In conclusion, modern times show a real break from the past. It thus goes to the establishment of a true globalization of food making it possible to eat foods that cannot be cultivated in the consumer.

Therefore this also goes hand in hand with an industrialization of food which is gradually leading to a certain harmonization of tastes and flavors. And then, modern times are also the period when overfeeding and the use of hunger as a weapon of war have taken on a far greater proportion than in the past.

Tell me what you eat, how you eat, and I’ll say who you are! This is a proposition that can be formulated to its neighbor since the beginnings of mankind. Yes, food has a story, yes, food is a reflection of all societies. Yes, food is a real social marker, which is what UNESCO has understood by including many culinary arts as an intangible heritage of humanity.

An impressive amount of knowledge with, as Belin editions are accustomed to us, superb iconography, hundreds of thematic boxes that make reading particularly pleasant.